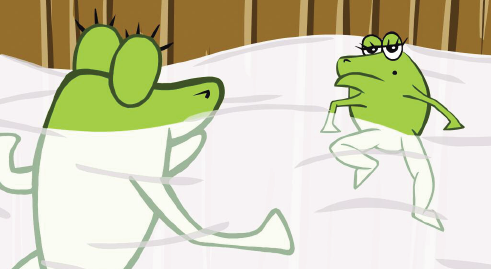 Once upon a time, there were two frogs who were the
Best of friends. One was weak, and the other was strong.
Like brothers they were to each other nonetheless.
Trouble and adventure they explored to excess.
Often they found themselves where they did not belong.
Hopping around the countryside they did with glee.

When they saw a farmer leave a bucket in front
Of a stable, the two frogs were so curious
To know what was inside it. So they just jumped in.
Fate would have it they committed the gravest sin.
They were nose deep in milk, and they were furious
With each other for having performed such a stunt.

They could not get out. The sides were too slippery,
So they swam, and kept swimming, thinking someone may
Come upon them and rescue them, but it was not
Meant to happen. They continued to swim a lot
For a long time. In survival mode they would stay.
They continued their struggle indefinitely.

Said the weaker frog to the stronger, “We must quit!
No one will come to save us. It is of no use
To go on this way.” He stopped swimming, and he died.
The other kept on swimming because he relied
On his positive outlook. What he did produce
Was butter. Through his motion he got out of it.

It’s a different orientation when you
Understand that you create your reality.
You are the sole attractor of all that you get.
Whenever things come to you that you do regret
It’s because you’re not believing it completely.
Things that happen are because of your point of view.

Your life is created by the story you tell,
And by things you remember, and conversations.
It’s about how you feel about things and about
Finding ways to enjoy life… to mitigate doubt
That you are meant to be here. All the conditions
Are set up by the power intent does compel.

Do intend to be joyful in every moment.
Find something you can focus upon, and create
A magnificently clear point of attraction.
You do not have to think about getting things done.
You enhance your commitment to feeling just great
By acknowledging when things reflect your content.

Guide yourself to awareness and observations
Of things turning out your way as you get to know
How to tune yourself instantly into that space
Where you’re fed by the cosmos’ infinite grace.
Turning thoughts into things that will constantly flow
Is what you came here for. You’re among blessed ones.